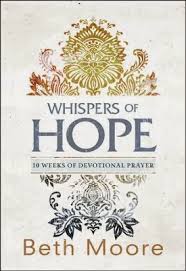 Whispers of Hope is a daily devotional about prayer. The author begins by breaking down the parts of prayer; praise, repentance, acknowledgment, intersession, supplication for self, and equipping.  She described these in detail. Then she follows each day’s entry with a listing of those categories headlining a space to write.  People who like to journal during prayer will enjoy this book.

She continues by covering the subjects we might struggle against. For example, one entry studies gossip. Another talks about God’s gentle reality-check when we think we know more than He does.  She also reminds us that we can go through storms though we are completely in His will.

Whispers of Hope covers ten weeks of daily meditations so I won’t list every subject.

Beth Moore is a popular speaker and writer of long standing. Her writing, like her speaking shows her to be intelligent and articulate. You will find new ways to look at your problems. 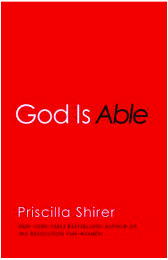 Now to Him who is able to do exceeding abundantly beyond all that we ask or think, according to the power that works within us, to Him be the glory  in the church and in Christ Jesus to all generations forever and ever. Amen.

Paul wrote Ephesians 3:20-21 when he was imprisoned, it seems more likely that he would write a liturgy to his suffering as David did in many Psalms. Instead, Paul found hope in God apart from his circumstances.

I reviewed a book by author Priscilla Shirer several years ago, published by Moody Press--publisher of learned treatises on Christian truth. I found that book, though valuable and useful, a little dry.

But Moody editors must have removed her personality. God Is Able gives a glimpse of an attractive woman who lives her faith. She writes as she probably speaks.The reader will find no dryness here.

She understands discouragement and trouble, but has come through it more in love with Christ than in all her life as a preacher‘s daughter. God is Able is not self-help. If you follow these five steps it will all be fixed. There isn’t a single step to follow (unless you count turning your life completely over to God).

I came away from God Is Able encouraged, and determined to pray bigger to a bigger God than any of us can imagine.

One point of  disagreement; it has become fashionable to stick the title in the middle of the page with no other decoration and call it a cover. I miss the days of beautiful covers. There is no reason to choose this book in a bookstore.

Priscilla Shirer is the daughter of Dr. Tony Evans and a busy writer and speaker in her own right.

I received this book from the author's representative. I have not met the author and I receive no pay for any review. This is my opinion.

Couponing for the Rest of Us 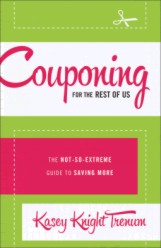 Kasey Knight Trenum runs a couponing site called Time 2 Save Time 2 Give. This book covers the ways those who don’t want to fill their basements can live better through couponing. Don’t confuse her methods with a ho-hum way to grab some coupons at the last minute and run to the store. It takes work and planning.

Unlike the extreme couponers who clog checkout lines with $500 of merchandise, proudly whipping out $5 at the end, Kasey advises shopping to cover three months. She says sales return about that often.

The information is excellent and Kasey’s friendly personality shines through. The one problem is too much information in the first 67 pages. She used too many pages to sell couponing.

Kasey approaches couponing from a clear Christian slant. Much of her couponing goes to giving.

Worth the price. Those pinched by the economy will find it a useful handbook.

I received this book through NetGalley. I do not receive pay for any book I review and I do not know the author. This review is my honest opinion.

Book Review: The 5 Languages of Apology 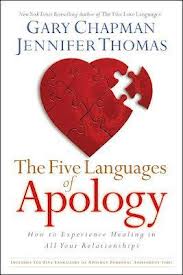 Subtitle: How to Experience Healing in all Your Relationships

Have you ever had a disagreement with spouse, friend, or coworker and the apology given didn’t mend your hurt feelings? Or maybe you tried to apologize only to have your apology rejected. Possibly your apology didn’t match the style of the receiver.

Gary Chapman and Jennifer Thomas discuss the various apology styles in The Five Languages of Apology. Apologies can range from a simple “I’m sorry” to restitution. One man, successful in his lifetime dream of a sports career, had an affair. To make amends, he gave up his dream and quit sports, thus taking himself out of temptation’s way. His wife didn’t ask him to do that, but it saved his marriage.

Sometimes the receiver responds well to a gift. Another recipient might feel offended.

Chapman writes like an educated man. He doesn’t use jargon or three-syllable words, but The 5 Languages of Apology is not a conversation over the table at Starbucks. The book reads well but the style is a little dry.

I received this book from Moody Press.

Book Review: Things I Wish I'd Known Before We got Married 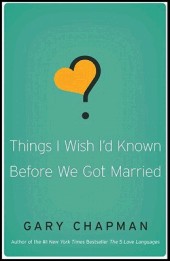 When newly married, Gary Chapman and his wife found their attitudes about everything strikingly at odds, although they shared their Christian faith. Happily-ever-after eluded them. He says many marriages falter before the seven-year mark because of unmet expectations.

He talks about family influences, religious differences, accepting the personality differences in the other person even when the spouse breaks the dishes in the dishwasher. He discusses sex, money styles, children: whether to have them and how to raise them. He covers the unexpected problems that can take the fun out of marriage. He says the “tingles” usually disappear after the first two years. At that point, the couple needs more to keep the marriage going.

He also refers to The 5 Love Languages and The 5 Apology Languages, two books written by him. If you have read those, you will find those chapters repetitive.

Though he and his wife are Christians, he wrote this book for all faiths. Gary Chapman directs Marriage and Family Life Consultants, Inc. People considering marriage can take away much from his professional advice.

Those making a lifetime decision based only on the tingles might discover some nonnegotiables here. For example, a wife may treat the husband as her mother treated her father. If the mother has a trait the husband can’t stand, will he hate his wife for the same trait? Is it something she would work to change?

Things I Wish I Had Known Before I Got Married is written by a professional psychologist. Gary Chapman doesn’t speak with jargon or three-syllable words, but he does speak like an educated man. It doesn't feel like a conversation at Starbucks.

I received this book from my church library