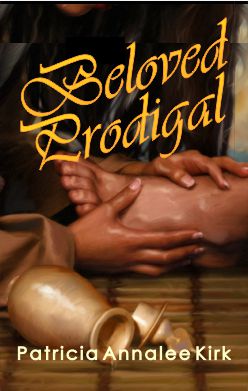 And there was a woman in the city who was a sinner; and when she learned that he was reclining at the table in the Pharisee’s house, she brought an alabaster vial of perfume, and standing behind him at his feet, weeping, she began to wet his feet with her tears, … (Luke 7: 37-38)

It was the Mary who anointed the Lord with ointment, and wiped His feet with her hair, whose brother Lazarus was sick. (John 11:2)

I watched the young girl in horrified fascination. I longed to march across the street, grab her and drag her home. But I stood transfixed.

Sandaled feet milled around me in the marketplace. I took no notice. Men and women shuffled down the bricks of the walk. Noisy drivers in the roadway snapped whips and clicked their tongues over the sounds of donkey hooves. I might have been alone.

Mary wore the standard frontlet of a harlot. It circled her skull and dropped in a V on her forehead--her name embroidered on it. Heavy gold rings weighted her hands. They glinted in the sunlight as she reached toward the men who passed. She smiled an invitation.

The slight frame of the tiny woman identified the child I scolded and raised. She lured her prospect with her brown--nearly black--eyes, rimmed in curling lashes. Though I wasn’t near enough to see them I remembered those lashes. The immodest garment exposed her figure. A man nodded. She took his arm and they left.

Sickened, I veered toward home, the weight of my pain a millstone on my heart.

My mind flashed a memory. A tiny girl sat on a stool before me as I combed her long hair. It now hung to the middle of her back, defiled by scissors or hand axe. Lights jumped and glittered from jeweled braids. She wore no head cover.

I looked toward heaven, grateful my parents joined their ancestors long ago.

A sedate scarf bound the heaviness of my curls against my neck as law and custom dictated. A thin blue veil trailed across my back and arms. As I walked away, I lifted my head and thrust my shoulders back. I greeted any woman who smiled. Many may shun me but no one will pity me.

Jemima walked past and smiled. “Shalom Martha, how beautiful the sky this evening.”

Bless dear Jemima, my husband’s wife. Her full lips always smiled. The hips on her wide body moved from side to side with each step. She towered over me as she passed.

The day Mary left dawned with sunshine. Crimson-centered white lilies and red windflowers gleamed from their places in the entrance. My spirit lifted with the promise of pleasant weather.

Two mornings before, Mary celebrated her sixteenth birthday. Now I sent her to the market for necessities we didn’t grow or raise. Flushed cheeks hinted at excitement. Why? What did she plan? Why didn’t I ask? Mary never welcomed questions. She stiffened and walked away. She wrapped her thoughts around her with a “keep out” sign reflected in her face.

When she left, she wore a scarf, coins hung from the edges. They notify interested men of her availability for betrothal. Despite her beauty, no one asked my husband, Hamel, for permission to wed her.

Five hours later I paced between the fire pit, and the courtyard entrance. Frantic, I gazed at the street, awaiting her return. A respectable Jewish girl must come home before dark. Sunset changed to nightfall with no sign of her.

At the ninth hour, Lazarus followed Hamel through the door.

I lunged at them. “Mary left for the market hours ago. She didn’t come home. What can we do?”

Lazarus put his arm across my shoulders. “She met a friend. Remember how distracted she gets. Here. Hamel and I will bring her home.”

Hamel nodded and smiled. He took my hand and rubbed it. “Don’t worry. I’m sure we’ll find her.”

They rushed through the door so near their sandals skidded against each other. They returned hours later, dejected. The ebony night blinded them and hunger distracted them.

Hamel crossed the room to the table. “No one has seen her. I’m hungry. Please forgive me. I must eat.”

“Your food is ready.” I took the dishes, kept warm on the fire pit, and placed them in front of Hamel.

“I pray she stayed with a friend. The village gossips don‘t need grist for their blather.” Lazarus slumped on his stool. “We’ll rest and try again tomorrow.”

I stared. What do the villagers say?

Martha barely noticed me when I left. I carried my clothes in an apron under my tunic, tied around my knees. She didn’t heed my awkward gait.

I witnessed her lonely marriage. I saw when she accepted a betrothal from a man she didn’t know. Her face revealed her reluctance.

After the wedding ceremony he ignored her, just like Father. I removed the scarf with coins from my head as soon as I moved away from the house.

Free. Finally Free. I longed to flee the stifling life of my family. I loved Lazarus and Martha and hated to hurt them, but they didn’t understand. They spent their time working and going to the synagogue to worship a God I didn’t accept--a God who stole my mother. Then he sent that other woman--a bad joke. I spent my time far from her.

Father pretended to love us while Mother lived but when she died, he didn’t bother to pretend.

I talked to Gersham and LaRue’s girls each time I visited the market. They bragged of having money, clothes, and care. I wanted to have those things too. Fun. And wealth.

Gersham, LaRue’s son awaited me today. At eighteen, he recruited the girls. I met him at the Marketplace. Then he took me to LaRue’s brothal. I met the girls as we sat and talked. Apparently, they work at night. I’ll have a day or two to settle before they give me my work. I met two huge, frightening young men who spend all their time with Gersham.

The girls welcomed me and offered wine. None of them had families so I suppose the group became family. While we talked, I heard of what happened to Gersham as a boy. Ruffians beat him and poked his eye with a whittled stick. Afterward, he took in two large boys, lonely and crying out for a home. In return they protected him.

The girls sat in night tunics until later when they dressed for work. I wondered if they required me to wear such clothes. They were not what I liked; garish, vulgar, and not much there.

The girls left at the seventh hour. Later, they brought in men who went with them to their rooms. I felt uncomfortable and resolved to go home the next day.

While they were out, LaRue taught me how she wanted me to make up--heavy paint, kohl-rimmed eyes, and scarlet lips.

The next day, Lazarus and Hamel came. I could never go back. Hamel glared with watery eyes. He clenched his fists and opened them. His stance bellowed, “I want to kill you.” I stumbled into the house, shivering with fear.

That night Gersham showed me what I must do. The law didn’t allow everything. Though it wasn’t respectable, they allowed harlotry. Without the laws, I supposed it might be worse.

I cried in my covers each night for several months, but eventually adjusted to it. I felt numb toward the men.

I sat at the table with Hamel. Martha laid lentil soup and fish at my place, and I ate without noticing. My attention stayed on the entrance. Mary will walk through at any moment. I prayed in silence.

I slept little that night. In my thoughts wild animals tore my little sister apart or her body lay in the street, the victim of chariot wheels. When I comforted Martha with the comment that Mary met friends and forgot the time, the words didn’t comfort me. She should have come home by now.

The next morning, before sunrise, Hamel and I threw on our mantles, and hurried to the Marketplace. I asked everyone I met if he or she saw Mary this morning. No one must guess she didn’t come home. Every merchant denied seeing her.

Storekeeper Bela arranged his wares on the table. He shifted his gaze from the raisin cakes to the ground. “I saw her.” He moved the cakes, still unwilling to meet my eyes. “She stood with Gersham, and left with him.”

“No. It can’t be.” I stared at him, unable to believe his words.

“You asked. I told.” He turned his back, ending the conversation.

Surely Gersham kidnapped her. She didn’t go by choice.

I found Hamel, and we ran toward the house of harlots owned by LaRue, mother to Gersham. Gersham stood in the entrance. His two large friends hovered behind him, arms folded across their huge chests, a human wall. Mary stood looking through their arms--her eyes outlined with kohl, lips rouged bright red, and hair braided. She made no move or gesture to us.  She replaced the innocent garb she usually wore with suggestive red cloth pulled from her shoulder. I stared to recognize her. My sister lurked in this harlot.

“Mary. Why are you doing this?” Hamel’s livid face shone with perspiration. Air whistled between his teeth as he spoke, a nervous tic.

She spun around, and walked into the house.

We stood stone-like as we watched her go. Grief and anger overwhelmed me. I longed to kill the man standing before me who defiled my sister.

Gersham gazed at us through slitted eyes, one blue, inherited from the Roman who visited his mother one day, the other hazel. The eyes told the story of the day on the road when big boys beat the smaller boy. The young devils punished him for his mother’s profession. They only stabbed the circle of color in his eye, missing the black center. His vision survived, but the hazel eye didn’t return to blue. Gersham went nowhere alone after that. He found two large young boys as troubled as he, and they became inseparable. Now they protected him from us.

Later if we met Mary in public, we turned our backs to her. She slid past us with face fixed on the ground, or walked across the street.

A week after our encounter with Gersham, I came home to see Martha sitting on the bench in the courtyard, shoulders bent. Martha never rested during the day. Her hands stirred pots and made bread. Her feet ran to finish her work.

As I moved closer, I heard her sob. She dabbed at her eyes with a cloth.

“Hamel gave me a bill of divorce.”

My chin dropped. “What?”

“He gave me a bill of divorce. The council will expel him as leader with a harlot in the family, so he separated himself from the family.”

“I can’t let this happen.” I determined to find Hamel. “He will listen to me.”

I heard the fright in Martha’s voice as I charged through the door. “Lazarus, he treated you as his son.”

Download Beloved Prodigal at the Links shown on the Left.

Posted at 07:45 AM in Sample Chapters | Permalink

The comments to this entry are closed.